Coca chewing out of the UN convention? 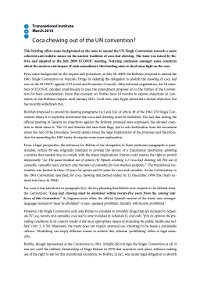 This briefing offers some background on the issue to amend the UN Single Convention towards a more coherent and realistic stance on the ancient tradition of coca leaf chewing. The issue was raised by Bolivia and adopted at the July 2009 ECOSOC meeting. Noticing confusion amongst some countries about the motives and impact of such amendment, this briefing aims to shed some light on the case.

First, some background on the request and procedure; on July 30, 2009, the Bolivian proposal to amend the 1961 Single Convention on Narcotic Drugs by deleting the obligation to abolish the chewing of coca leaf was on the ECOSOC agenda (UN Social and Economic Council). After informal negotiations, the 54 members of ECOSOC decided unanimously to pass the amendment proposal on to the Parties of the Convention for their consideration. From that moment on, Parties have 18 months to express objections or comments on the Bolivian request, until January 2011. Until now, only Egypt presented a formal objection, but has recently withdrawn this.

Bolivian proposed to amend by deleting paragraphs 1(c) and 2(e) of article 49 of the 1961 UN Single Convention where it is explicitly mentioned that coca leaf chewing must be abolished. The fact that during the official meeting in Geneva no objections against the Bolivian proposal were expressed, has allowed countries to think about it. The US and Sweden did raise their flags, just to ask clarification from the secretariat about the rest of the procedure. Several details about the legal implications of the proposal and the procedure for amending the 1961 treaty do require some more explanation.

From a legal perspective, the relevance for Bolivia of the abrogation of these particular paragraphs is questionable. Article 49 was originally intended to provide the option of a transitional reservation allowing countries that needed time to comply with the treaty implications. Parties could reserve the right to permit temporarily “(a) The quasi-medical use of opium; (b) Opium smoking; (c) Coca leaf chewing; (d) The use of cannabis, cannabis resin, extracts and tinctures of cannabis for non-medical purposes.” The transitional reservation was limited in time: 15 years for opium and 25 years for coca and cannabis. As the Commentary to the 1961 Convention specified, for coca chewing that period ended on 12 December 1989 (the treaty entered into force in 1964).

For coca it was laid down in paragraph 2(e), the key phrasing that Bolivia now requests to be deleted from the Convention: “Coca leaf chewing must be abolished within twenty-five years from the coming into force of this Convention.” As happens more often, the official Spanish version of the treaty uses stronger language: instead of ‘must be abolished’  it says: ‘quedará prohibida’, literally ‘will become prohibited.’

However, the Single Convention only asks Parties to consider to 'prohibit' drugs that are included in Schedule IV (e.g. heroin and cannabis; coca leaf is only included in Schedule I), and only "if in its opinion the pre-vailing conditions in its country render it the most appropriate means of protecting the public health and welfare" (Art. 2, § 5b). Moreover, the treaty does not require personal use (chewing) to be made a punishable offence. 'Abolishing' can imply different means to achieve this, whereas ‘prohibiting’ refers to legal measures.

Bolivia, though represented at the Conference in 1961, initially did not sign the Single Convention at all. It was not until the military dictatorship of Hugo Banzer in 1976 that accession took place, without making use of the right to ask for this transitional exception. So Bolivia, in fact, was under legal obligation to abolish (or ‘prohibit’ ?) coca chewing as from its accession to the treaty. So, what is the relevance of the Bolivian request to delete these particular paragraphs?

Firstly, it is only in these paragraphs the treaty spells out that one of the objectives of the 1961 Convention is to abolish (or even prohibit) the traditional use of coca chewing. All other mentions of control of coca in the treaty (e.g. the articles dealing with coca bush cultivation) could be interpreted as to prevent the production of cocaine by placing controls on the raw material. For that reason alone, Bolivia is fully right in its assertion that this text has to disappear.

Secondly, realising the mistake they had made with the 1961 Convention, in an attempt to still obtain legal recognition for traditional uses, Peru and Bolivia negotiated paragraph 2 of Article 14 into the 1988 Convention, saying that any measures adopted “shall respect fundamental human rights and shall take due account of traditional licit uses, where there is historic evidence of such use.” Bolivia made a formal reservation to the 1988 Convention stressing that its “legal system recognizes the ancestral nature of the licit use of the coca leaf which, for much of Bolivia’s population, dates back over centuries.” Today, this argument has a legal added value, since the Constitution of February 2008 includes the coca leaf as part of the country’s cultural patrimony.

Thirdly, the International Narcotics Control Board (INCB) has more or less forced Bolivia to take this step since the Board is calling on them re-peatedly to abolish the use of coca leaf, including by referring to this particular paragraph of the 1961 treaty. In its 2005 Annual Report, for example, the INCB reminded countries of the fact that “the transitional measures regarding the licit cultivation of coca bush and consumption of coca leaf under the 1961 Convention ended a long time ago.”

And finally, the amendment procedure provides a useful ‘warming up’ for countries to start thinking about the coca leaf and its licit uses, as they have to define their position about this Bolivian request. The proce-dure does not require them to express explicit support for the amendment, only to decide if they see grounds to file a formal objection to it.

Even if the mention of coca leaf chewing would be deleted from the transitional reservation paragraph 49 of the convention, Bolivia would still be bound by the overall treaty obligation to “limit exclusively to medical and scientific purposes” any substance included in Schedule I.

If the proposed amendment has not been rejected by anyone within eighteen months, it automatically en-ters into force. In case objections are submitted, however, ECOSOC will have to decide again, whether an (expensive) conference of the Parties needs to be convened to negotiate the amendment. Other options are less clear, but in case few and minor objections are raised, the Council could decide to still accept the amendment in the understanding it will not be applicable to those who explicitly rejected it. If more and substantial objections are tabled, the Council could also decide that the proposed amendment is rejected. In the latter case, a dispute arises that could ultimately “be referred to the International Court of Justice for deci-sion”(Art. 48, § 2).

The discussion about it will help prepare the ground for the more complicated procedure for ‘unscheduling’ the coca leaf, removing it from Schedule I of the 1961 Convention. That procedure is due later on, with a separate formal notification to the Secretary General, passing by a recommendation of the WHO Expert Committee and brought to the agenda of the UN Commission on Narcotic Drugs for a decision by majority vote most likely no sooner than 2012. Only if that second procedure is successful, will current strict controls on the use of coca in its natural form be lifted and will the longstanding legal ambiguities be resolved.